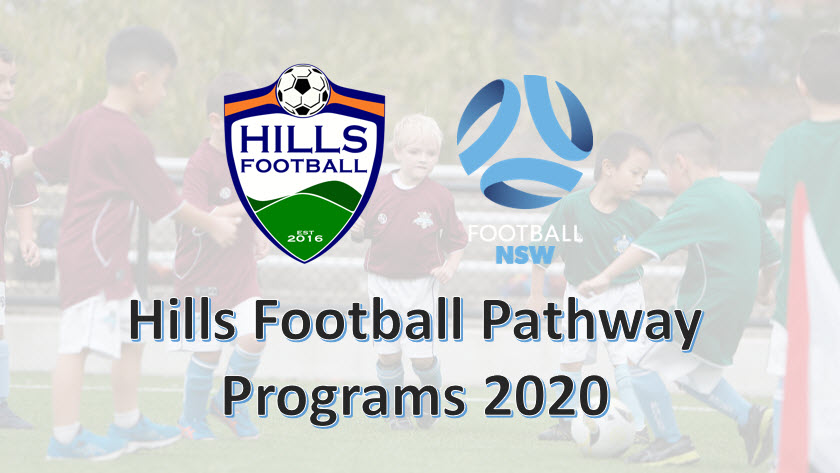 In a normal season this weekend should signify roughly three quarters of the season completed however, we are only at the first quarter mark! As such we are doing a quick wrap of how the season has gone across the age groups so far!

In a strange season that started back with the assessment process in October the Association Youth League (U13, 14, 15 & 16 Boys) and Girls Skill Acquisition Phase (U10, 11, 12 & 13) other wise known as Hills Football Pathway Programs have started made some significant strides forwards.

The season didn’t underway for the boys AYL until round 2 due to the Epping Boys High School being sent into lock down, that game is still set to be rescheduled. So round 2 back in mid March took centre stage at Bella Vista Public School to Manly Warringah FA. There were many firsts come game day, the first Hills AYL game, first Hills Football goal and the first points on the table all amongst some of the more obvious firsts.

Up next was the turn of the girls. The girls flew out of the blocks really quickly playing some impressive football against Nepean FC. All grades competed really well and scored some excellent goals. The atmosphere at Bella Vista was really rewarding and enjoyable.

Just as momentum was flowing, leaps and bounds lock down hit hard. To the testament of the players and coaches the hard work didn’t stop. New programs were created, delivered, altered, recreated and redelivered weekly. The coaches trying to innovate and keep up the engagement with every player, using web chats, YouTube sessions, tactical videos anything to keep up the football. Tracey said “the coaches commitment to the girls during the down time as been very impressive.” “He has engaged and connected with the girls, 4 times a week for the past however many weeks now!”

Fast forward to 11th July (17 weeks between competition games) and competition Pathways football resumed! First up was the boys away at Blacktown Districts SFA. With a tinge of slightly unknown with all the new Covid restrictions the players put their best foot forwards, adapting and applying. The AYL came away from Blacktown with 4 wins from 4! Not bad for only the second ever AYL competition round of football for the Hills Football.

Next up was the turn of the girls on Sunday morning away in the sunny Inner West at Lambert Park against APIA Leichhardt. Playing on some unique field sizes and the odd different goal size, the girls went out and played like they hadn’t had a break. The Under 10’s kicked us off for the morning watching their smiles is always worth the drive! Janine says “I can honestly say I have not had a happier kid since my daughter was given the opportunity in this team”. “She has developed her skills immensely due to the coaches and the professional environment.”

Next up was another home weekend with the boys stepping out first on Saturday hosting St George FA with an afternoon kick off, ending with the Under 16 under lights. The points across the day were shared relatively evenly with Hills Football edging it with 2 wins, a draw and one defeat. The U16 came away with a 1-1 draw but couldn’t quite work out how after hitting the woodwork 3 times across the 80 minutes, the St George Keeper was arguably the man of the match. Under 16 Coach Adam says “from where we started at our very first trial date last year, the team has come together and developed ten fold.” “The team still remain undefeated so far, which is huge in our inaugural season. I couldn’t be more proud of the players and coaches.”

Following on to Sunday morning and GSAP welcomed a new experience. Set in the draw to host Inter Lions FC. Unfortunately Inter Lions could only supply players for the Under 11 and 12’s. As such after some time flicking through the Hills Football draw two teams were found that had a bye in their regular competition. As such Hills Football GSAP welcomed the Hills Knights Under 9 boys and Kellyville Kolts Under 13 Girls for a friendly game. The games took place in great spirits, with all games highly competitive. Hills Football and all the U10, U13 GSAP players thank the boys and girls for coming out and giving them a good run. It was a good experience for the boys to play on a bigger field with a new formation. The GSAP 13’s also got to experience 11v11 football, some for the very first time. The U11 and U12 had their shooting boots on making the most of it, scoring some great goals!

Last weekend saw the arrival of Southern Branch to Bella Vista, the boys from Nowra making the trip up for the day. This was another new test for the AYL program given that a number of the Southern players were part of the NPL Tier 2 Youth in 2019. There was some noticeable improvements and some great forward steps taken over the course of the game day. Unfortunately the Under 16 had a bye due to Southern not being able to complete that age group. As such they have to wait to extend their undefeated run. Sunday saw the return once again of GSAP football at BVPS. Although the Girls will be away for the next 3 weekends now. On Sunday Eastern Suburbs FA were the visitors, bring some very competitive squads giving all ages a great test. Under 10 Coach Eugenio said “he was so proud of the girls, they played so well. Some really fluid passing, and deadly shooting!”

Next up: AYL U14 travel away to Manly tonight with U16 doing the same on Wednesday. The U13 and U15 were also meant to play but due to the current wet weather in Sydney the game has been moved to next week when they can get onto the synthetic at Cromer Park. The boys then entertain North West Sydney Football at BVPS Saturday morning.

Next up: GSAP as mentioned now have 3 away trips on the bounce travelling to Gladesville Ravens, Football South Coast and Sydney University.